Cap and Trade versus Tax

April 25, 2007
While the scientific debate over global warming has now pretty much been relegated to the status of illusion in the flat-Earther's minds, the question of what to do about it is profoundly unsettled. How do you regulate a ubiquitous and economically essential activity with global scope? Denialists don't have much logic or fact on their side but they do have a very legitimate concern. Any action capable of limiting global carbon emissions is certain to have important impacts on the freedom of action of individuals and nations.

Our first, largely symbolic attempt to regulate greenhouse gas emissions, the Kyoto accord, was an utter failure for many reasons, but above all because the most important players didn't sign on. Without broad international agreement, especially by the US, China, Europe and India, nothing important can happen. Moreover, in addition to agreement, any useful accord will need real teeth.

Two broad approaches are commonly discussed: so called "Cap and Trade" plans and a carbon Tax. The idea behind Cap and Trade is mandates on carbon emissions imposed by national and/or supranational authority, with strict limits on total emissions, with the right to emit being purchased or allocated. Presumably, an efficient market will allocate the required emission cuts in some nearly optimal way. A carbon tax, of course, is just a tax on the carbon content of material to be converted into CO2.

At some level the two amount to much the same thing, but Cap and Trade seems to offer more scope for corruption and associated profiteering. If governments start passing out "pollute-but-get-out-of-jail-for-free" cards, there seems certain to be plenty of scope for speculation and graft. An elaborate police apparatus would be needed to prevent cheating. Consequently, I prefer a tax, preferably as high up the food chain as possible - at the point of importation or extraction.

Transnationally, however, that would be hard to implement. Consequently, I would advocate a sort of hybrid system whereby nations are taxed by their total emissions, with the proceeds of the tax going to climate mitigation efforts, with at least a portion of the tax going to global mitigation efforts not confined to the nation itself, for example, for maintenance of the rain forests.

The transnational tax should possibly be slightly indexed to wealth.

If no such system can be implemented, then the business as usual scenarios unfold. When reality's bite becomes severe enough, the weak and vulnerable (like much of Africa) will collapse into war and famine. The strong and vulnerable, like the US and possibly China, may be forced to make war on the rest of the world to destroy its industry and oil and gas production.

I think Wolfgang's chart (see comment 3) is not inflation adjusted. Compare this chart. 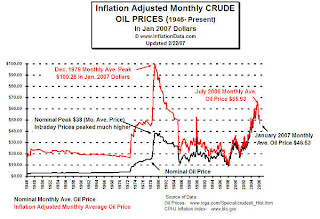 Compare this chart of total production"

The dramatic increase of price in the mid 1970's preceeded, and arguably, caused a long term slow down in growth of oil usage.

March 03, 2019
Is it just me or did anybody else find the images of Trump hugging the flag vaguely emetic?
Read more