Showing posts from November, 2017
Show all

November 16, 2017
There are two accusations against the comedian/senator: first that he forcibly kissed the woman against her will, and second, that he groped her while she was sleeping and was photographed doing it. The trouble with the first accusation is that his accuser admits that she agreed to be in a skit in which he tried to kiss her, and further, that she agreed, however reluctantly, to rehearse the kiss. This is a gigantic hole in her story of being kissed against her will. Her problem was that she just didn't like the kiss. When you sign up for an acting gig, rehearsal is a an expected consequence, and the time to protest is before, not after. She also reports that she angrily pushed him away. That's not an appropriate way to react to a scene not going exactly the way you expected, and Franken was understandably offended, maybe as much as she was. The second charge, groping, or simulated groping, is more serious, especially because it was photographed. Franken's revenge wa
Post a Comment
Read more

November 16, 2017
Oddly enough, the word axes is reputed to be the only word in English which is the plural of three different English words: ax, axe, and axis. Though I think that it's a stretch to consider ax and axe as different words. Ax and Axis both trace back to Proto-Indo-European words that sounded similar and had their modern meanings, but I'm not sure if they were related. So far as I know, the dwarvish 'Baruk' (Axes) is not related to the Hebrew 'Baruch', בָּרוּךְ, (blessed), which is related to the semitic word knee.
Post a Comment
Read more

November 10, 2017
Moore has denied the allegations against him, and his supporters have attacked his accusers. How about lie detector test all around? I don't have that much faith in them, but willingness to take one is often a good indicator.
Post a Comment
Read more

November 10, 2017
I've never watched his shows or otherwise been a fan, so the very credible sounding accusations against him didn't surprise and dismay me in the same way learning about Bill Cosby did. It seems that Louis C. K. is connected with practically everybody in comedy, as friend, former writer, or mentor. Is it really possible that none of these people had a clue what was going on? The rumors have been out there for some time, and the victims apparently were telling friends, colleagues, and others long before they were interviewed by the New York Times. I think that Jon Stewart, Jerry Seinfeld, Aziz Ansari and practically every night time host you ever heard of have some explaining to do. So far nearly all of them have kept their silence or been evasive or worse. Louis C. K. was Stephen Colbert's first boss in comedy and so far has been practically the only male to speak out at all. A lot of these creeps are going to escape without any legal consequences, but at least they
Post a Comment
Read more

AI Going to Take Your Job?

November 05, 2017
Kevin Drum opined that real AI is going to take everyone's job, but he thinks real AI is still decades away. Like objects in your mirror, AI that can do your job is closer than most people believe. It may well be that AI with a general intelligence exceeding humans is a few decades away, but the fact is that most jobs in today's world don't really demand that much general intelligence. What they do require is some specialized intelligence, and we already have AI that has proven very good at that sort of thing. Your cab driver, your radiologist, your check out clerk don't actually need to appreciate Shakespeare or the NFL to do their jobs, they just need some knowledge in a specialized area. I think that it's underappreciated that the big thing holding back robots today is not intelligence but sensors and actuators. Humans, and for that matter, ants, are equipped with rich suites of each. Progress in making small sensors has been very rapid, although the speci
Post a Comment
Read more

November 04, 2017
Rand Paul, Senator and opthamologist, purportedly was assaulted by a neighbor, also a physician, in their gated community in Bowling Green Kentucky. The alleged assailant is said to be a pain specialist.
Post a Comment
Read more 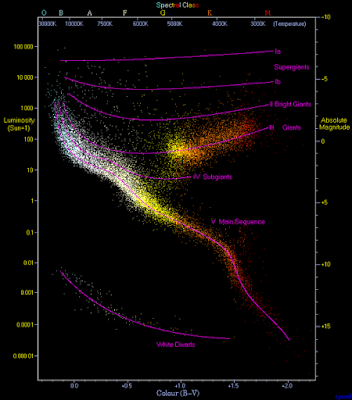 If you were to understand only one thing about stellar structure and evolution, it ought to be the Hertzsprung-Russell diagram. It's a simple idea - a plot of the absolute luminosity (brightness) of stars against their surface temperature (often captured via their color, as measured by their relative brightness in two bands, the blue (B) minus the visual (V).) Below is a version, from the Wikipedia link, due to Richard Powell. The most obvious feature of this diagram is the non-random distribution of the stars, with most of them being concentrated near a slightly curved line from lower right (low luminosity versus red color and low temperature) to upper left (high luminosity versus blue color and high temperature). This line is the main sequence, and consists of stars burning hydrogen in their cores, which is how they spend most of their lives. There is also a more diffuse blob of stars to the right of the main sequence, consisting of bright and cooler stars inhabiting the
Post a Comment
Read more

November 04, 2017
A Pulitzer Prize winning columnist got in trouble for commenting on Huckleberry Sanders' weight. As a fat person, I suppose I should resent that. I mean there are lots of good reasons to knock her, like her incessant lying, slander, and ridiculous non-sequiturs. Should we really need to go after her fake eyelashes? On the other hand, if we can't make fun of a person's appearance, what are editorial cartoonists to do? And Stephen Colbert's show might have to go to a half-hour format. I'm probably insensitive and spoiled because my acquaintances seem to be polite enough to not knock my appearance to my face.
Post a Comment
Read more

November 03, 2017
Another former pro football star, now in declining mental health, has promised to donate his brain to research on CTE. His son was also a victim of football, a quadrapelegic as a result of a neck injury. They, like many other critics, believe that youth football, especially for younger players, should be banned. Meanwhile, as every season, very serious football injuries continue to pile up. One straightforward rule change could probably drastically change injury rates - ban unlimited substitution. Because of unlimited substitution, line positions in football are now dominated by 330 lb. behemoths who are so strong that they routinely injure others and themselves with size and strength. Current rules mean that they play in 12 second bursts for a small fraction of the clock time. If players had to play most of the game, offense and defense, with much shorter breaks, linemen would quickly get 60-70 lb (or more) lighter.
Post a Comment
Read more
More posts