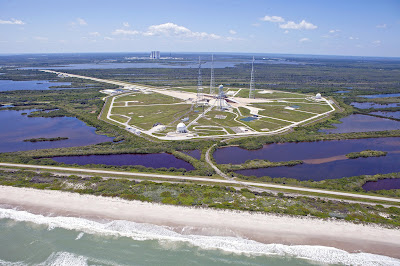 NASA is mostly on the water. John Schwartz, writing in The NYT, takes a look at the coming flood. Physics and safety like launching space vehicles over the ocean and from southerly locations. Transport of large rockets is more feasible by sea than on land. Consequently, much of NASA's infrastructure is situated in areas very vulnerable to rising sea levels.

KENNEDY SPACE CENTER, Fla. — The concrete block perches absurdly atop a piling, elevated about 10 feet above the beach sand. Is it art? A bulky milepost?

Carlton Hall pointed to the puzzling object and explained that it was once a tie-down block for securing structures like antenna towers. Dr. Hall, the chief scientist for the space center’s ecological program, said that when he started working here a few decades ago, the block had been buried. Now the sand that enveloped it is gone, swept away by the forces of coastal erosion and storms.

He gestured toward the waves rolling in nearby and said, “The beach used to be at least 50 yards out.”

On the other side of the dunes, a quarter mile away, sit two artificial hills some 50 feet high. Those are NASA’s two biggest launchpads. And to the south sit several smaller ones.

NASA is just the tip of the multi-trillion dollar iceberg, of course.

Water is Coming. Winter? For a while, anyway.