From Under the Rock

Yet more evidence of all the creeping, crawling things coming from under the rocks Trump has overturned:

High-school students in Texas did a Nazi salute in their senior pictures, setting off a firestorm of controversy after the photos spread on social media. A student who witnessed the incident at Cypress Ranch High School told KPRC that the students pictured, about 70 of them, were shouting phrases such as “Heil Hitler” and “Heil Trump.” 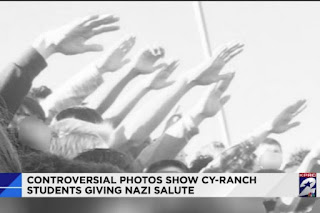