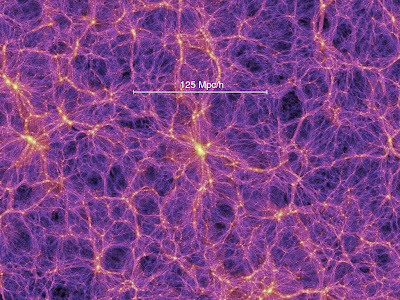 The lights along the filaments are galaxy clusters.  Major intersections are superclusters.  The distance scale indicator is 125 Mega parsecs or about 400 million light years - about 5000 times the diameter of our galaxy, the Milky Way.

The guys at Max Planck Institut also did a fly through video, including a look around at a supercluster:


An imagined reality with empirical support.