When simulations of the early universe are done, matter (dark and normal) collects in very large scale [tens or hundreds of millions of light years] filaments of overdensity. Galaxies and stars develop in these filaments, the voids between them are largely empty of matter.

Here and there - ok, mostly there - two filaments intersect. Such intersections are the breeding grounds of galaxy clusters and superclusters. The large concentrations of dark and normal matter in such clusters draws streams of gas from the filaments whose intersection marks the cluster, with the result that the cluster is bathed in a vast sphere of superheated (10^7 -10^8 K) but very low density (10^-7 to 10^-1 baryons/cm^3)gas.

If two or more such clusters are close enough, their mutual gravitational attraction will propel them into high speed (10^7 km/hr) collision. These results can be spectacular, as in the case of the "Bullet Cluster" (Formal names: 1E 0657-56, 1E 0657-558) 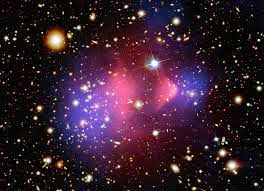 In the picture, the white light is the visible spectrum, the red is an X-ray image from the Chandra telescope, and blue is dark matter inferred from gravitational lensing. The characteristic Mach cone shape of the shock front is seen on the right X-ray image. These galaxy clusters, each with hundreds or thousands of galaxies and hundreds of times more mass and stars than our milky way, apparently collided about 150 million years before this.

The massive stars with their low cross section and high mass just passed right by each other. The ionized gas clouds of each clusters, which make up the great preponderance of their ordinary baryonic matter, collided like bricks, and mostly got left behind in the middle. Dark matter, like the ordinary matter in stars, and so is also effectively collisionless.

It's plausible that these clusters will do this dance a few more times in the next few billion years before forming a single, larger cluster. Since these clusters are almost 4 billion light years away, it might be more precise to say they already have. Of course our galaxy will collide with big sister galaxy Andromeda and the Sun will die (of natural causes) before news of their current comoving state reaches us.