...sounds to me like it should be part of a tobacco pitch, but apparently not.

Some of you may recall that I'm something of a student of the Austro-Bahamian school of economics, as exemplified by the writings of its foremost exponent. Of course his works are occasionally a bit cryptic, even Derridesque, perhaps.

Anyway, he recently trashed the famous IS/LM model, which made me think that if it's that bad, I really ought to at least try to understand it. 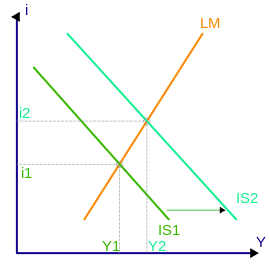 It seems that the model is actually two curves, often drawn as straight lines, in a space that represents interest rates (vertical axis) and gross domestic product (horizontal axis), as above. Now if you suspect that econo-space might have more dimensions than two, just consider it a two-slice of that hyperspace. The two curves represent hypothetical equilibria, with the participants being S, the propensity to save; I, the demand for investment; L, the so-called liquidity preference; and M, the money supply.

The intersection of these two curves, the first in what might be called in "real" space, and the second in"monetary" space, supposedly represents a grand equilibrium.

Problems and defects of IS/LM are discussed in A-B above, and in the Wikipedia article, both linked above. The meaning, use and applicability of the model to present circumstances is discussed rather nicely by Krugman.

Corrections to my interpretation welcomed.