If poor people knew how rich the rich were, they would be rioting in the streets.......... Chris Rock

A new article in The Atlantic, which apparently borrows heavily from a new book by Richard V. Reeves, claims that the real problem is not the rich, but the upper middle class, defined as the 9.9%, meaning those members of the top ten per cent in wealth who are not members of the top 0.1%.  It argues somewhat persuasively that the tax code, zoning laws, labor and licensing laws, elite university admissions policies and much else have been rigged to specifically benefit those persons at the cost of everybody else.  Matthew Stewart, the author of the Atlantic piece, argues that the 9.9% constitute a new American aristocracy.

In recent decades, economic inequality has exploded in the US, and economic mobility (the movement of persons from one economic level to another) has sharply declined.  Who is to blame?  The new aristocrats says Mr. Stewart.

This kind of  action deserves some kind of third law reaction, and Jordan Weissmann, writing in Slate, provides a rejoinder.  Hold on a minute, he says.  It's not really the 9.9%, it's that old villain, the 1%, who are really the problem.  The problem is not the upper middle class, it's the actual rich.  A centerpiece of the argument is the following graph, from Saez and Zucman, mapping the change over time of relative share of the national wealth. 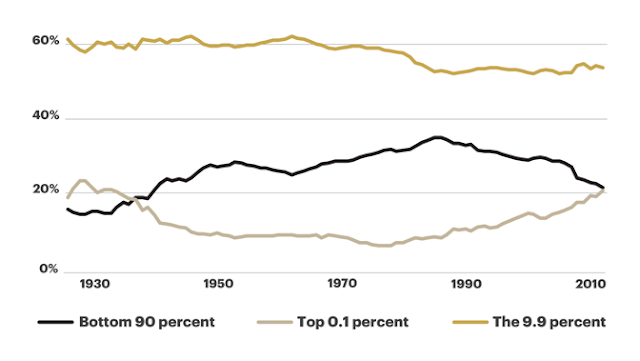 The share of national wealth owned by the bottom 90% went from about 16% in the late 1920s to a bit more than twice that in the late 1980s, just as Reagan was wrapping up his Presidency.  Much of that share came out of the hide of the rich, but a substantial chunk came from the 9.9%.  The 9.9% had and continue to have most of the national wealth, but of course they are 99 times more numerous than the 0.1%. The share of wealth of the rich has roughly doubled since 1980, while the upper middle class has held steady since  about 1990 and the bottom 90% has seen its share plummet.

The Atlantic article strangely enough, blames this on the 9.9%.  The Slate article demolishes this manifestly dubious claim by looking at the income distribution in finer resolution.  The following graph shows that while income shares were essentially flat in the 80th-90th percentile and in the 90th to 95th percentile, the group from 96th-99th percentile made modes gains, huge gains were made by the top 1%. 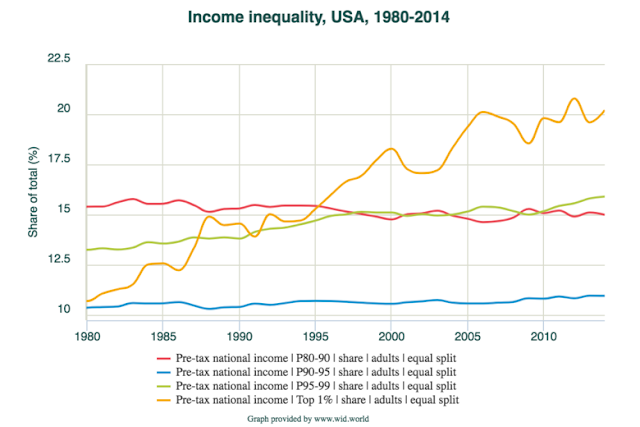 Nearly all of the gains of the 9.9% have gone to those at the top.

So how rich are the rich and the upper middle class?  In 2017, it took about $1.2 million to make it to the 90th percentile.  It sounds like a lot to me, but if you have a reasonable house in an expensive city and an IRA, quite plausible for a thrifty retired person.  By contrast, the entry fee for the 1% is just over $11 million, and it's $43 million to make it to the 0.1%  The three richest Americans have more wealth than the bottom 60% of this needle shaped pyramid.  The income distribution looks like one of those higher order approximations to a delta function.