September 03, 2011
A favorite constellation in the right-wing galaxy of lies is the notion that government spending has exploded in the Obama years.  Paul Krugman takes a look at the facts.

Do the dismal economic numbers really reflect the turn to fiscal austerity? I keep hearing people say no, because austerity hasn’t actually happened yet in America. But they’re wrong.

The fact is that the fading out of the stimulus, and in particular of aid to state and local governments, is already and noticeably leading to substantial withdrawal of government demand. Look, in particular, at actual government purchases of goods and services — governments at all levels buying stuff — which is what standard macroeconomics says should have the highest multiplier, since unlike transfers and tax cuts it is by definition spent rather than saved. Here’s the picture, showing changes in real spending over the previous year: 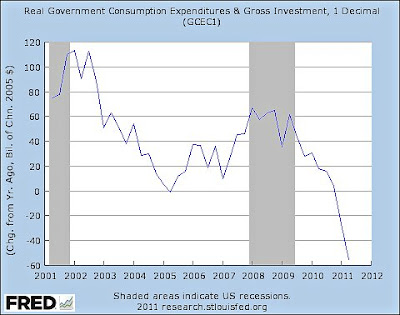 Krugman estimates that cuts in government expenditures have take a per cent or more out of the economic growth.