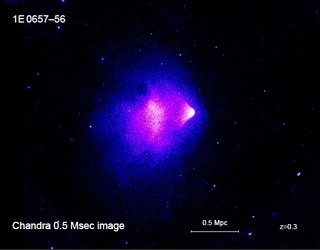 John Baez has some information/speculation on the discovery of hard evidence of dark matter on This week's finds number 238. A couple of clusters of galaxies seems to have collided about 4 billion light-years away. The x-ray image above shows a smaller cluster moving to the right trailing a shock wave.

Markevitch and company have been studying the "Bullet Cluster", a bunch of galaxies that has a small bullet-shaped sub-cluster zipping away from the center at 4,500 kilometers per second. Here's a picture of it from the above paper:


To help you understand this picture a bit: the official name of the Bullet Cluster is 1E0657-56. The "exposure" for this X-ray photograph taken by Chanda was apparently 0.5 million seconds - 140 hours! The distance scale shown, 0.5 megaparsecs, is about 1.6 million light years. The cluster itself has a redshift z = 0.3, meaning its light has wavelengths stretched by a factor of 1.3. Under currently popular ideas on cosmology, this means it's roughly 4 billion light years away.

Anyway, what are we seeing here?

You can see rapidly moving galaxy cluster with a shock wave trailing behind it. It seems to have hit another cluster at high speed. When this kind of thing happens, the gas in the clusters is what actually collides - the individual galaxies are too sparse to hit very often. And when the gas collides, it gets hot. In this case, it heated up to about 160 million degrees and started emitting X-rays like mad! The picture shows these X-rays. This may be hottest known galactic cluster.

That's fun. But that's not enough reason to call a press conference. The cool part is not the crashing of gas against gas. The cool part is that the dark matter in the clusters was unstopped - it kept right on going!

How do people know this? Simple. Folks can see the gravity of the dark matter bending the light from more distant galaxies! It's called "gravitational lensing". Here are the mass density contours, as seen by this effect.

To see the other picture you will have to go to John's site.

He is part of a cool new physics-math group blog, too called The n-Category Café.

January 26, 2020
One of the more fascinating and creepy events in biology over the past twelve years has been the development of cerebral organoids, sometimes called mini-brains, in a petri dish.  Biologists have learned how to transform regular cells, for example skin cells, into pluripotent stem cells and in turn transform these into neural stem cells and grow them in vitro.   These clumps of grey matter spontaneously organize themselves into something like mini-brains, developing axons and dendrites, developing neural connections, and sending each other electrical neural signals.  These organoids clearly have the potential to teach a lot about brain development, brain function, and brain disease. They also pose deep ethical questions.  Nobody thinks that these organoids are conscious - yet - but the potential is there.  Experimenters are already plotting to make them more brain like by providing them with blood supplies and sensory inputs. Quanta takes a look at the nascent ethical concerns:
Read more

August 07, 2020
In an earlier comment, William Connolley wrote that he thought the US was "wealthist but not racist."  I want to assure him that he is quite wrong.  The history of racism in the US started with slavery but continued with Jim Crow.  The cardinal principle of Jim Crow was denying blacks the right to vote.  This policy was ensured by law and violence, with widespread lynching being the go to sanction.  The passage of the voting rights act during the 1960's was the first solid hole in this policy, and it turned the South from solidly Democratic to solidly Republican. Ever since, the Republican Party has depended on racist support for it core voters.  The scumbags of the Republican Supreme court gutted the Voting Rights Act, and ever since the Republican Party has made a career of suppressing the black vote.  Techniques today are a bit more subtle than in the hay day of the KKK - burdensome voter registration rules, placing voting sites far from predominantly Black neighborho
Read more