December 04, 2006
OK, so the headline is mainly a joke. Gavin Schmidt at Real Climate has reported that The Sky is Falling, or in rather less alarmist terms, that the stratosphere is cooling. Models predict it and measurements confirm it.

Inquiring minds, in the comments section, wanted a simple explanation for why. I've had a crack at this before, and Eli Rabett took me to task for my explanation. Instead, he offered this version from Professor Uherik, which he, Gavin, and most of the RC crowd seem to like. I don't buy it. 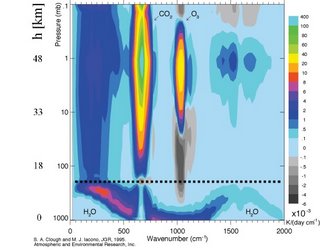 The picture, Uherik's figure 3, depicts the atmospheric cooling versus height and wavenumber. The dotted line is the tropopause. The light blue color represents regions of the height-wavenumber space where no net radiative cooling or heating is taking place. The colors to the right show how much or how little radiative cooling takes place, with green representing a lot and gray meaning that net radiative heating is taking place.

At 250 cm^(-1) for example, the region near the surface is light blue because radiation absorbed and emitted are in balance. Higher up, in the same spectral region the radiation decouples from the matter for lack of water molecules, and is lost to space. At 670, it's light blue from surface to the tropopause, because at the center of the CO2 band we are in thermal equilibrium all the way up.

The following sentence from Uherik seems to be at least seriously misleading if not outright bogus: If this [CO2 in the troposphere] absorption is really strong, the greenhouse gas blocks most of the outgoing infra-red radiation close to the Earth's surface.

HUMILIATING CONCESSION UPDATE (with quibble): The CO2 in the troposphere does a lot of blocking once the concentration reaches about 1/4 of the present level. Additional blockage due to additional CO2 at present concentration levels is purely on the wings of the 670 cm^(-1) band.

No frequency makes much of a *net* contribution until the sky above it is largely transparent, which doesn't happen for CO2 band center until you reach the stratosphere.

670 cm^(-1) is near the center of the strong CO2 absorption band. Notice that for that region, the atmosphere is light blue to the tropopause and beyond. That is emphatically not because it isn't radiating - it's radiating very strongly - but the downward flux of radiation from above is in balance with the upward flux at each level until well up into the stratosphere. Eventually the CO2 thins out enough so that it can start losing radiation to space (the colored regions above 18 km and on up well into the mesosphere.

It's wrong to say that more CO2 in the atmosphere limits the amount of thermal radiative transport into the troposphere - there really isn't any such net transport - not at any CO2 levels comparable to the present. The cooling effect of CO2 on the stratosphere is due almost entirely to the additional CO2 in the stratosphere making it a better radiator.

UPDATE: After study, meditation, and a couple of furry rodent lagomorph administered beat downs, I'm forced to admit that there is an element of bogusiosity in my argument. Adding CO2 to the troposphere does decrease the CO2 reaching the stratosphere, albeit only on the wings of the CO2 band, and it's really a logarithmic effect overall. I would further offer that since the additional emissivity in the stratosphere is almost a linear effect, and since the less pressure broadened stratospheric CO2 is not particularly sensitive to the far wings of CO2 emission, the stratospheric CO2 effect seems more likely to be primary. But I can't actually do the arithmetic.

PS - About the beat downs. I would have dropped that rodent lagomorph like a bag of bunny fur if that damn crazy bird of his hadn't kept nipping at my liver.

PPS - In compensation, he did give me this pretty MODTRAN pony. It's really cool. Now I want ones for Venus, Mars, and Titan.

No New Worlds to Discover?

November 25, 2020
Alexander at 30 something grieved that there were no more world's to conquer.  Robbert Dijkgraaf writing in Quanta, asks whether physics has reached that sad state.  While he concludes in the negative, his denial sounds more like "hey, we can still add a few decimal points here and there." Lubos Motl and Peter Woit both have commentaries up today, and Lubos is predictably outraged at his one time coauthor, and Peter is more measured. The Universe still has some puzzles for us of course, but it is not clear that their understanding will have the same kinds of revolutionary import that the discoveries of Newton, Maxwell, Einstein and the quantum theorists have had.  In particular, the Cosmos is starting to feel a bit cramped.  Of course it is indeed large beyond our imaginings, but there don't seem to be dragons out there, or at least not dragons that we don't already know about.  Black holes, quasars, gamma ray bursters all seem to fit pretty neatly under known la
Read more

August 07, 2020
In an earlier comment, William Connolley wrote that he thought the US was "wealthist but not racist."  I want to assure him that he is quite wrong.  The history of racism in the US started with slavery but continued with Jim Crow.  The cardinal principle of Jim Crow was denying blacks the right to vote.  This policy was ensured by law and violence, with widespread lynching being the go to sanction.  The passage of the voting rights act during the 1960's was the first solid hole in this policy, and it turned the South from solidly Democratic to solidly Republican. Ever since, the Republican Party has depended on racist support for it core voters.  The scumbags of the Republican Supreme court gutted the Voting Rights Act, and ever since the Republican Party has made a career of suppressing the black vote.  Techniques today are a bit more subtle than in the hay day of the KKK - burdensome voter registration rules, placing voting sites far from predominantly Black neighborho
Read more